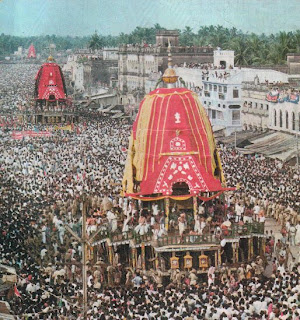 Ratha Yatra is  a huge Hindu festival associated with LordJagannath held at Puri in the state of Orissa, India during the months of June or July. Most of the city's society is based around the worship of Jagannath with the ancient temple being the fulcrum of the area. The festival commemorates Lord Jagannath's annual visit to Gundicha mata's temple via aunt's home (Mausi Maa Temple which is near Balagandi Chaka in Puri).

Ratha yatra, the Festival of Chariot : Chariots of Shri Jagannath is celebrated every year at Puri, the temple town in Orissa, on the second (dwitiya) day of shukla pakshya (waxing cycle of moon) of Ashadh Maas (3rd month in Lunar Calendar). The presiding deities of the Jagannath Temple, Puri main temple, Lord Jagannath, Lord Balabhadra and Goddess Subhadra, with the celestial wheel [ Sudarshana chakra ] are taken out from the temple precincts in an elaborate ritual procession to their respective chariots. The huge, colourfully decorated chariots, are drawn by multitude of devotees on the bada danda, the grand avenue to the Gundicha Temple (Gundicha - King Indradyumna's Queen) , two miles away to the North.On their way back from the Gundicha Temple, the three deities stop for a while near the Mausi Maa Temple (Aunt's abode) and have an offering of the Poda Pitha, which is a special type of pancake supposed to be the Lord's favourite. After a stay for seven days, the deities return to their abode.